Where does ethnic concentration matter for populist radical right support? An analysis of geographical scale and the halo effect 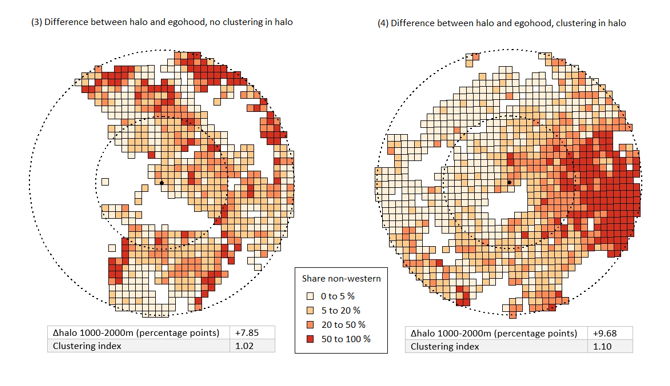 It is often hypothesised that the share of the population in an area belonging to an ethnic minority group positively influences the support for populist radical right-wing parties among native residents. However, empirical tests of this relationship have yielded mixed results, which may be a result of the wide variety of geographical scales at which ethnic concentration has been measured. Furthermore, it may be that it is the spatial distribution of minorities within the residential area that matters for radical right support, rather than their overall group size. The present study examines these issues by constructing egohoods and halos of varying sizes around respondents’ homes. Connecting survey data from the Netherlands Longitudinal Lifecourse Study to detailed geographical data on ethnic concentration, it is found that support for the Dutch PVV is high in areas with low shares of minorities and decreases in areas with higher minority shares, up to a tipping point when minorities make up around 25% of the population. When shares of ethnic minorities become even larger, we tentatively conclude that support for the PVV increases again. This observed U-shaped pattern is consistent across distance-based egohoods ranging in radii from 200 to 5000 m, population-based egohoods with between 4000 and 120000 inhabitants, and administrative neighbourhoods, districts, and municipalities. Additionally, this study found that, in urban areas, native residents of relatively homogenous neighbourhoods whose surrounding area – the ‘halo’ – harbours a pronounced cluster of minority residents are more likely to support the radical right.